The content of organic matter is one of the most important soil fertility indices. Its role in the formation of environmentally sustainable agro-landscapes has long been known, but in pursuit of high yields and economic “profits” the role of mineral fertilizers is increasing, and the balance of organic matter confidently rolling into “bottomless money pit“.

Of course, this does not mean that you need to go straight to the biological or organic farming. The main task is to understand the reasons for the permanent decrease in the content of organic matter in the soil and find ways to solve the problem in order to prevent the decline of natural fertility and, consequently, the potential yield of cultivated crops.

Most people working in the agrarian sector understand the importance of organic matter for the soil. They write about it in various publications, talk at seminars and conferences, and scientific institutions (and not only Ukrainian ones) pay attention to this. What is the reason for the gradual degradation of soils?

The first reason: “Ukrainian soils are the most fertile.” This historical dogma has made up us the hostage of the natural fertility of the soil. Confidence in unlimited properties of soils reduces the need to maintain a decent balance of nutrients and humus to the phrase: ” After us the deluge!” However, long-term intensive soil use leads to a decrease of organic content matter and changes the ratio between its components. In particular, the content of the active fraction from 33-50 to 15-25% decreases (Fig. 1). 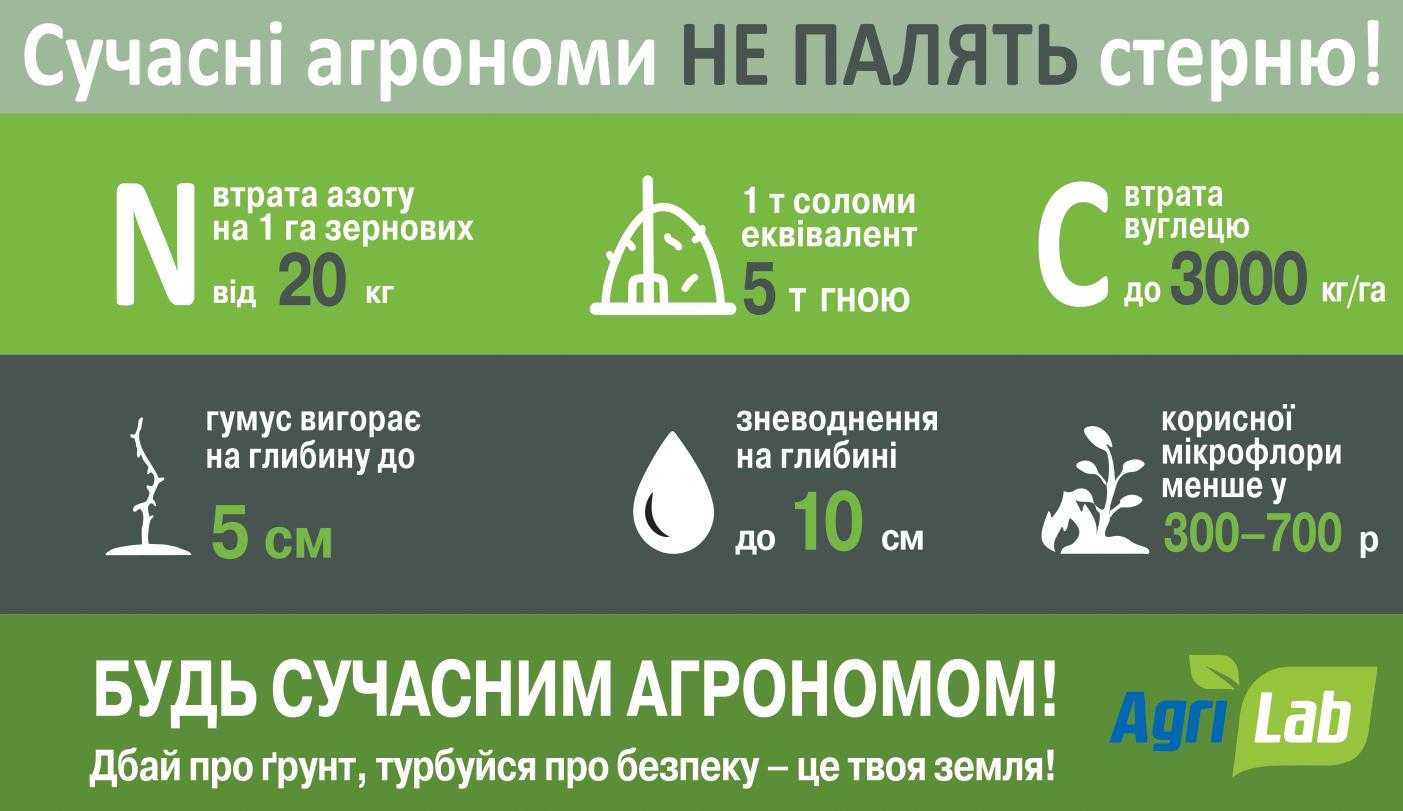 The worst case management option is burning of process residues. Of course, there are some advantages in this approach, but there is no case where they won’t outweigh the huge disadvantages. Especially those relating to the destruction of organic matter of the soil. According to the research results of the Agrochemistry department at NUBN, the burning of straw on one of the sites resulted in a decrease of humus content by 0.3%, alkali hydrolyzed nitrogen compounds – by 25 mg / kg compared to the other part of the field. How do you like them apples?

The effect of cultivation on crop residues can be obtained by adjusting the ratio C: N. So, for maize C: N varies in the range from 40 to 70: 1, for cereals – from 60 to 80: 1, and for legumes – from 20 to 40: 1. Crop residues of legumes contribute to faster accumulation of organic matter. For other crops, additional nitrogen fertilization is required to shift the C: N to more optimal performance. If you don’t do this, the microbiota for mineralization processes will use available forms of nitrogen, which will negatively affect the conditions of growth and development of culture.

The fifth reason: plowing is associated with high yields. Any cultivation activates the decomposition of organic matter. Each time the soil is processed, it is in contact with air. Oxygen stimulates or accelerates the action of microbes in the soil, which feed with organic matter. The greatest losses of organic matter are observed precisely when plowing. Due to this method of production, less stable humus is formed and more CO2 emissions are released to the atmosphere. 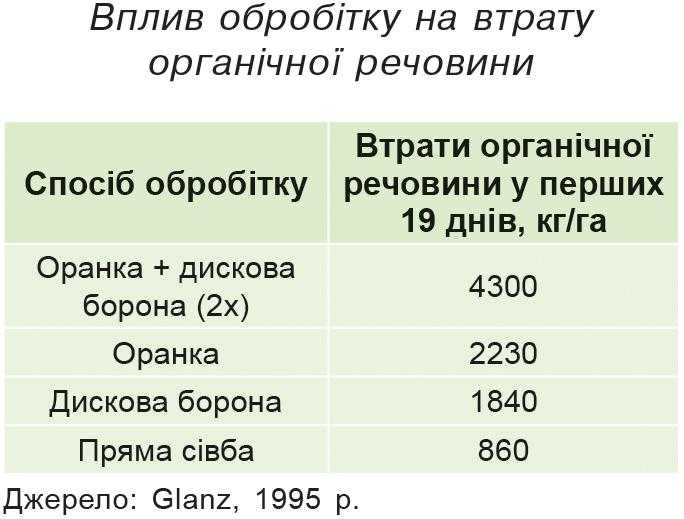 Minimization of cultivation is actively promoted in Ukraine. But the primary reason for partial or complete abandonment of plowing is not the loss of organic matter. First, farmers realized the negative impact of plow soles on the growth and development of crops. Secondly, they payed attention to the high costs of fuel and lubricants. Thirdly, there was a need for economical use of moisture. Soil protection cultivation positively effects on the water regime of the soil, including the positive effect of organic matter balance. As you know, organic has sponge properties: it can hold up to 90% moisture from the total mass.

The sixth reason: is the high rates of mineral fertilizers. Cations and anions that are part of their composition have different effect on organic matter. Scientists have found that single charged cations (NH4 +, Na +, K +) have a peptizing effect on organic matter. In other words, the destruction of the valuable structure and the deterioration of the properties of the soil occurs. To understand the consequences of negative effects, it is sufficient to mention the saturation of soil with sodium ions during the process of solubilization.

Organic matter is the most negatively affected by alkali and hydrolytically alkaline fertilizers. In fig. Figure 2 shows the result of the treatment of soils with mineral fertilizer solutions. The darker color of the filtrate indicates the removal of organic colloids. As expected, most fertilizers containing ammonium contributed to darkening of the filtrate. The solution of potassium chloride didn’t have peptic activity. According to research by scientists, other compounds of potassium, in particular, sulfate and carbonate, remove organic colloids (V.I. Filon, 2009).

During a relatively short period of time with cartograms, 19% of the area with a very high content of organic matter disappeared. There was a redistribution in other areas of provision. The analysis of crop development over the last 4 years (Figure 4) showed that in the zone with an average content of organic matter (2.5% in 2016 and 2.1% in 2017), the NDVI indices were the lowest regardless of crop. Of course, the problems in this zone is not only with the content of organic matter, but it could cause adverse conditions for the growth and development of plants, affecting the physical, chemical, agrochemical and other indicators. Accordingly, the approaches to the fertilizer system in the different productivity zones should be different.