Fertilizer of corn: from A to Z

“This world will never be the same as before …”. Modern trends dictate the new rules of the game in agricultural production. Innovative approaches and tools help to reduce the cost of agricultural products, leading to increased producer competitiveness in the market. As of today, the price of fertilizers is “biting” and this is forcing farmers to look for ways out of this situation. How to build a fertilizer system in stages? What are the results of those who implement advanced technologies in the construction and implementation of fertilizer systems? This will be discussed in our material on the example of corn.

This stage is the basis for building a quality fertilizer system. The process from beginning to end is constantly automated and refined: automatic sampler sampling with GPS tethered to the coordinate system, field splitting into elementary sections in seconds for any layers of information, analysis by dozens of indicators on automated equipment. 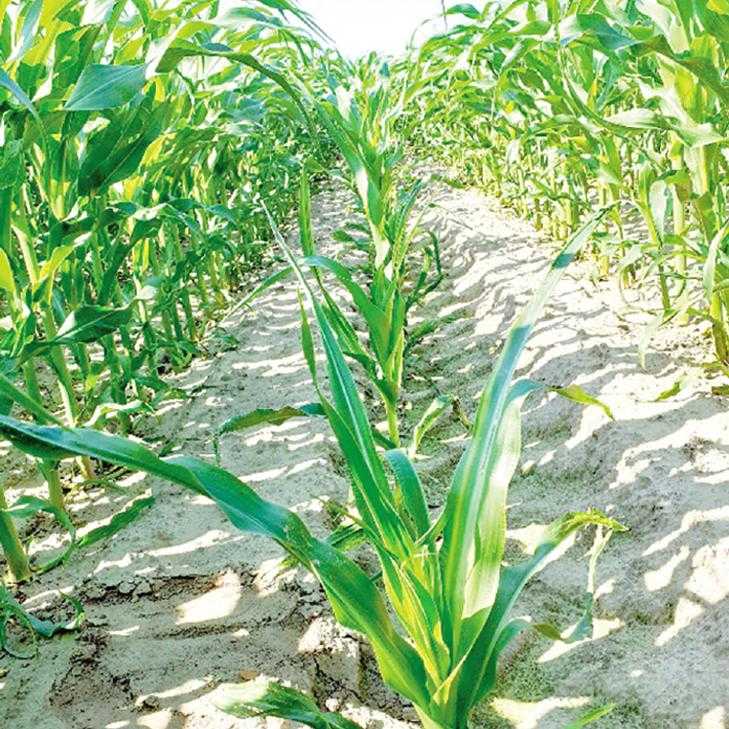 The results of soil sample analysis make it possible to determine the limiting factors for crop formation, to visualize data, to compare fields with each other, to establish field potential and form a fertilizer system.

Stage # 2 – determining the potential of the field

Why is it so important to know the level of potential crop yields? Of course, a significant proportion of the crop depends primarily on the weather and climatic conditions, but within the array of fields, in the same amount of rainfall, there are fields or areas of the field with higher and lower productivity. In farms for different productivity fields use the same planned crop yield. This means that the resource (fertilizers, seeds, plant protection products, etc.) is used the same and the profitability of production is different. 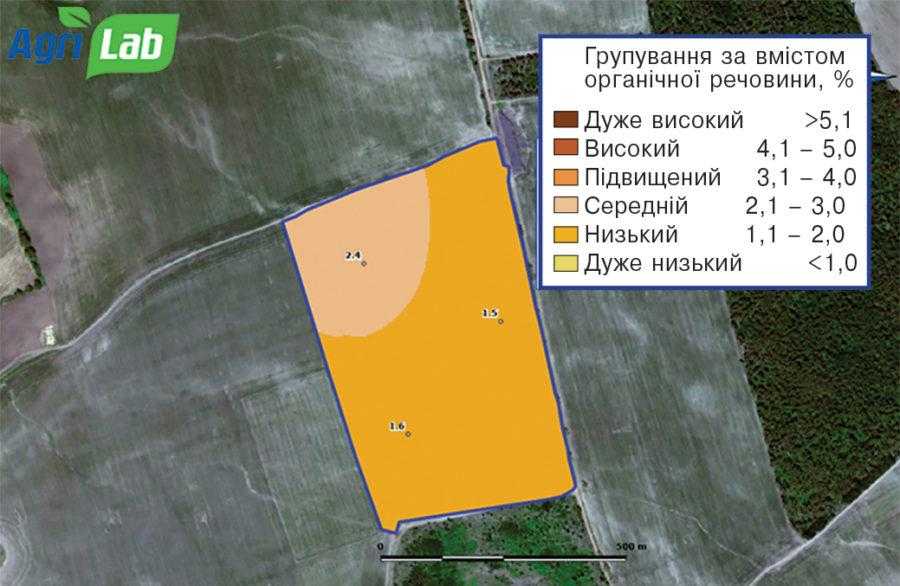 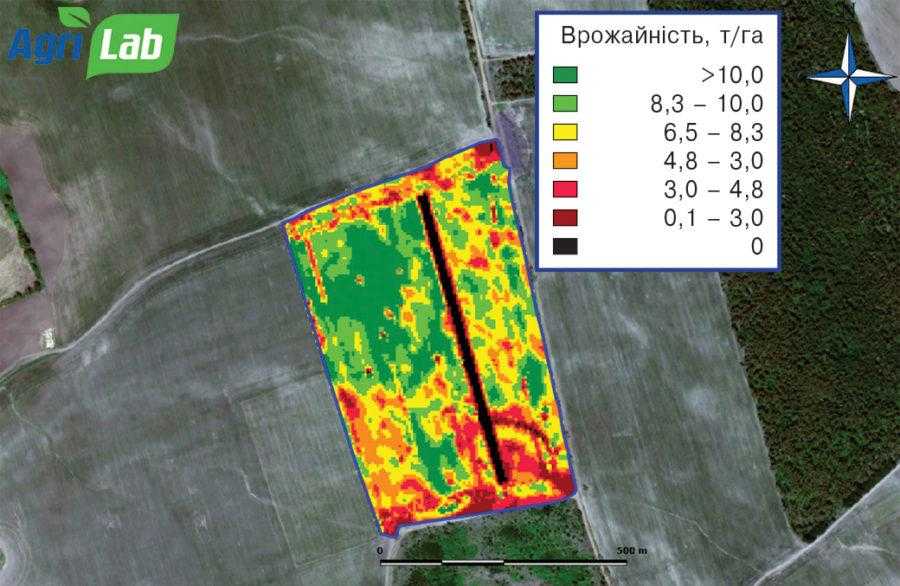 Such cases are typical of the fields of the Polesie and Northern Forest-Steppe zones. Therefore, it is not to be expected that a low-yielding area will increase its productivity through only mineral fertilizers. The root cause of this phenomenon may be the shortness of the terrain, different types of soils, agro-technical factor, and therefore, change the situation quickly is unlikely. In such cases, measures should be taken to restore soil fertility or to select crops that are not demanding of soil fertility. And the simplest way out of the situation is to calculate resources based on the potentials of culture within different productivity zones of the field.

There are many ways to calculate fertilizer rates and the results can go to radically opposite poles. For example, to provide 8 t / ha of maize on soils with an average degree of provision of mobile phosphorus compounds, 80 to 275 kg / ha of P2O5 should be introduced by different methods of calculation (Loginova IV). That is why the main thing for production is that the need for fertilizers is not only scientifically, but agronomically and economically justified.

For example, let’s take a field in Poltava region (algorithm of company “Agrilab”):

The recommended maize fertilizer system requires the use of macronutrients (NPK). Sulfur is important for providing nitrogen nutrition. A relatively small need can be provided by a complex fertilizer with a relatively low sulfur content. The degree of zinc supply in the average field is very high, but there are areas where the content was high and medium. The example of a fertilizer system is agronomically efficient and cost-effective.

Moving on to the implementation of the system of nutrition. At this stage, it is important to identify the plant food compounds and prepare a task card for fertilizer / ameliorates. Equally, important are the issues involved in setting up an “accurate” spreader and properly fertilizing. If it is a basic or pre-sowing application of phosphorus or potassium fertilizers, it is desirable to bring them to a depth of 15-18 cm.

Particular attention should be paid to the field map of acidity distribution in the field (Fig. 4). If the field needs liming, and the sites belong to different groups of acidity, then the introduction of a solid norm of limestone materials can have a negative impact on the sites with neutral and alkaline reaction. 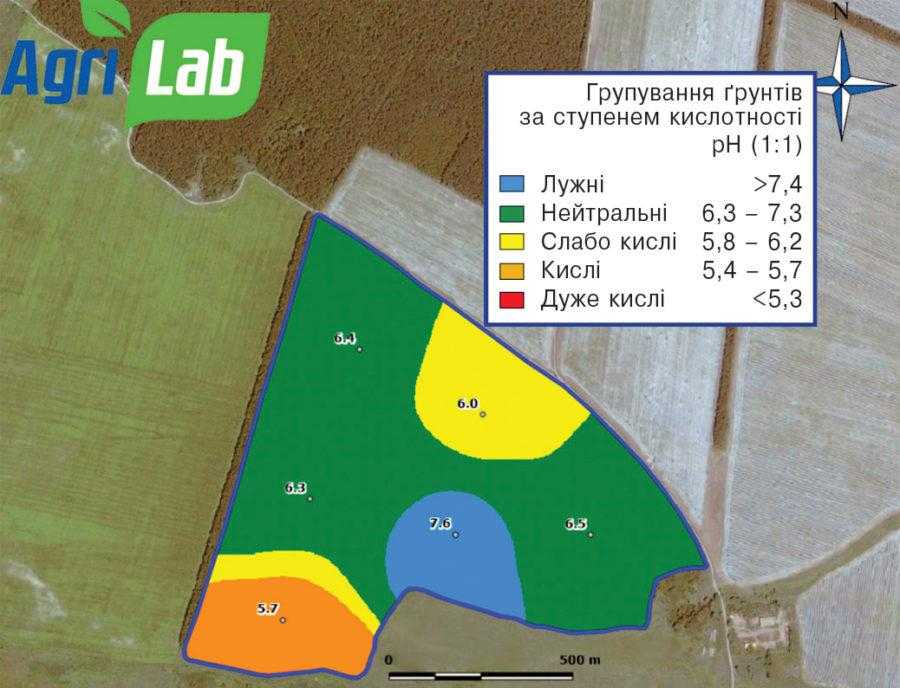 Differential application of mineral fertilizers is gaining popularity in Ukraine. The results also confirm the feasibility of using this measure.

Production experience. The farm in the Kirovohrad region has applied differentiated introduction of sulfoamophos and UAN-32. The latter was introduced to bring the nitrogen rate to one for the whole field, since with sulfoamophos, a different dose of this element was applied in different zones. The result is a yield of 9.6 t / ha (fertilizers are applied at a yield of 10 t / ha). The pattern across the field is homogeneous, despite different doses of phosphorus: yields ranged from 9.4 to 10.1 t / ha (Figs. 5, 6). 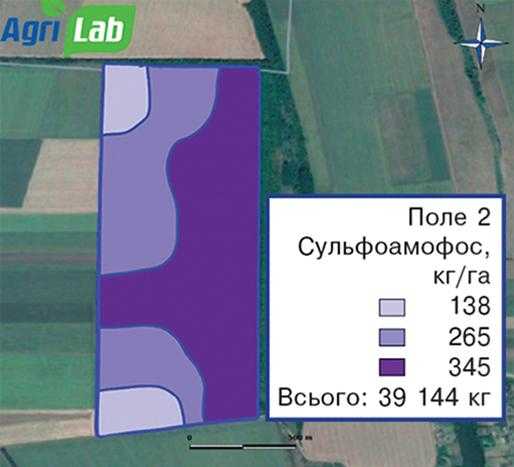 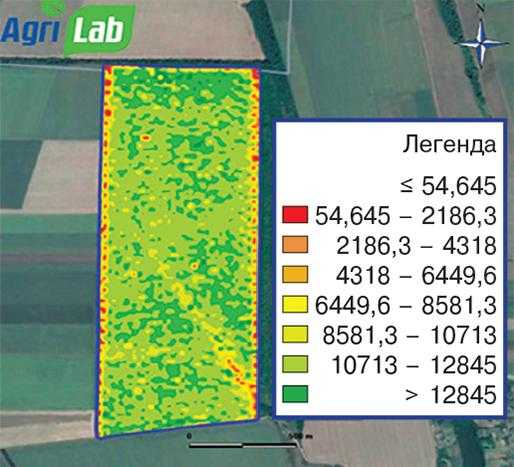 Foreign breeding companies are actively studying and introducing differentiated maize crops. In other words, it is about sowing as many seeds in a particular area as they can to reach their full potential. Does technology work in Ukraine? The extent of its implementation will be shown. It should be understood that the availability of equipment for differentiated sowing is only an opportunity. The completeness of its implementation depends on other elements of the technology of cultivation. For example, if the quality of pre-treatment is not the best, then the result of differentiation may not be.

Step # 5 – diagnosis of nutrition during the growing season

An indispensable element of technology for those who want to maximize the potential of corn. First of all, it is about determining the need for the most mobile elements – nitrogen and sulfur. If it is planned to introduce nitrogen into the root feeding, 50-80% of the planned rate is estimated for pre-sowing or main application. The rest is for the period beginning maximize the use of nitrogen maize plants (approximately since 5-7 leaf stage).

Based on the diagnosis, it is decided how much nitrogen fertilizers need to be application to ensure a possible level of yield. Weather conditions in 2019 have shown that a leftover dose of fertilizer may just be a cost savings. As a result of weather cataclysms (frosts, flooding, hail), cornfields at their best significantly reduced their potential, and at worst, destroyed them. 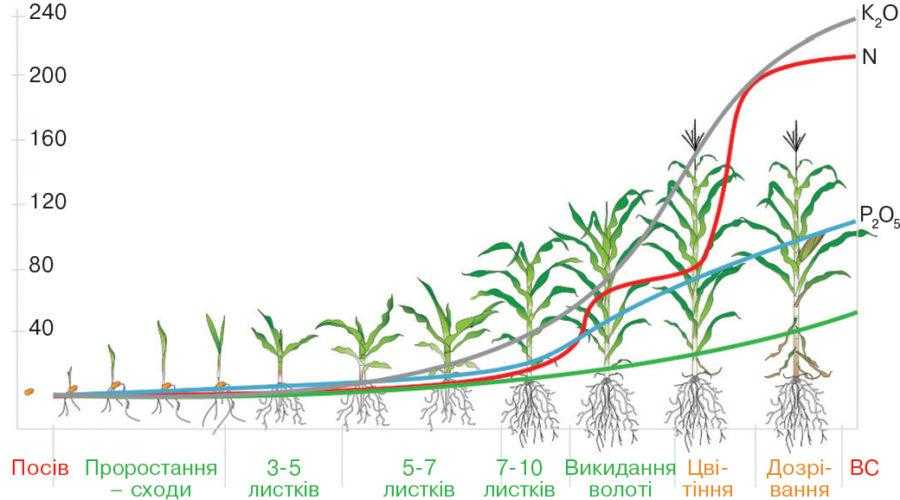 Fig. 7. Consumption of macronutrients by maize plants during the growing season (lnz.com.ua)

A prerequisite for quality recommendations for root feeding is to determine the available nitrogen and sulfur forms available in the soil. Why is this important? The variety of forms, norms, terms of application of nitrogen fertilizers, the influence of soil and weather conditions, technological factors (for example, uneven application) makes it impossible to fully predict the content of mineral nitrogen in different zones of the field at a certain stage of growth and development. Development zones can be determined by the results of satellite or UAV monitoring.

Production experience. In the first decade of June 2017, the farm in the Chernihiv region carried out diagnostics of corn nitrogen feed on an area of ​​137 ha (Fig. 8).ь100 kg of diammophoska were previously introduced. The results of the diagnosis revealed that the content of mineral nitrogen ranged from low to medium. To obtain a forecast yield level of 7.1 t / ha, it was necessary to differentiate the dose of nitrogen by field (average field norm of 36 kg / ha a.d.). There was no need to make sulfur. 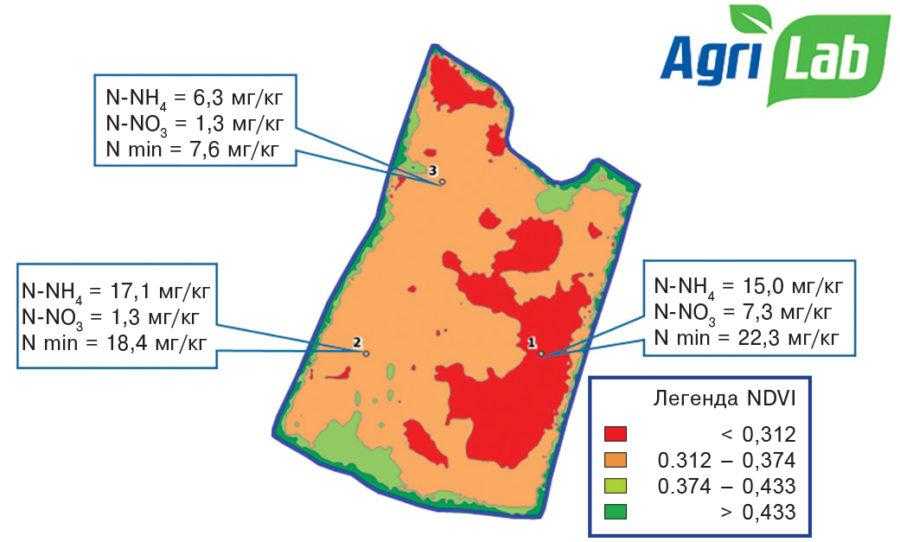 Production experience. In the farms of Khmelnitskyi region in 2018, anhydrous ammonia was introduced at a dose of 170 kg / ha of physical mass against the background of a complex fertilizer to ensure yields at the level of 10–11 t / ha. At the end of June – early July (the period of the highest nitrogen consumption – up to 70% of the total), the content of mineral compounds of nitrogen in the 0-30 cm layer was mostly high and very high, in the 30-60 cm layer medium and high. The need for additional nitrogen fertilizer was low or absent.

In Ukraine, services and software solutions are being actively developed to create maps for mineral fertilizers based on satellite image analysis. These products include an idea and an algorithm. How well they work can only be tested by conducting experiments in their fields. Anything that increases production efficiency has the right to life.

Stage # 6 – diagnosis of plants during the growing season

During the growing season of corn, there is a desire, and sometimes a need, for foliar fertilization. Usually, fertilizers with a selected chemical composition are used for this purpose under a certain phase of growth and development of the crop. So, is it possible to determine the plant’s need for specific macro and microelements during the growing season?

The available methods of plant diagnostics may be inaccurate but rapid (visual, rapid analysis of plant juice and sections), or accurate but with a waiting period of results (chemical). Functional leaf diagnostics are also popular, based on changes in the activity of leaf chloroplasts without the addition of an element, and then with its addition.

Production experience. The farm Kyiv region in 2017 had a diagnosis of functional leaf in maize plants. On visually healthy, well-developed plants, the device did not show a shortage of nutrition (in the “PN” column, almost “0” – 0 kg (g) / ha of active substance was in almost all cells). Weak plants (yellowing of leaves, developmental delay) revealed a whole “posy” of nutritional requirements. 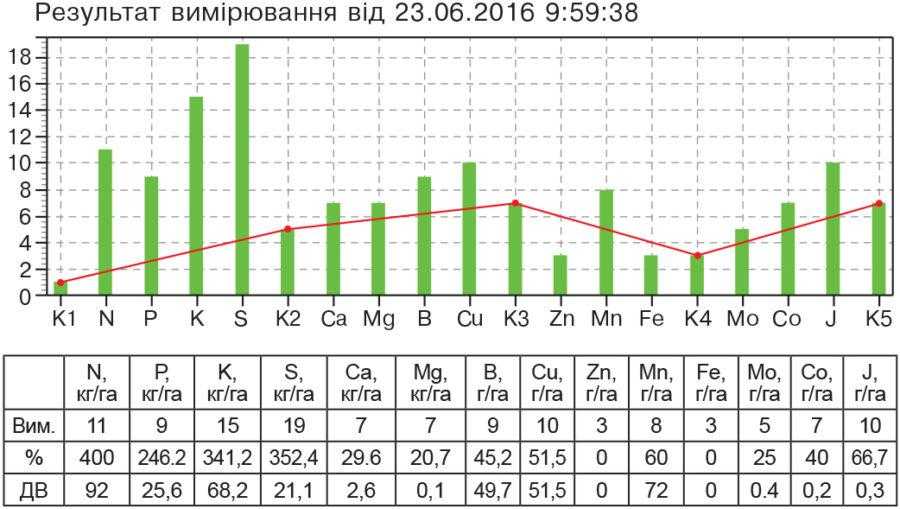 It is worth noting that any stress factor will lead to impaired synthesis and metabolism. Accordingly, even in the presence of sufficient nutrients in the soil, plants can and will behave as if they lacked, and plant diagnostics will confirm this. Therefore, conclusions about the results of this type of diagnosis should be made, understanding the history of the field, features of culture, technological operations in the field and, in particular, the agrochemical and physico-chemical properties of the soil.

Analyzing the condition of crops with the help of vegetation indices will help to identify problem areas and areas with higher productivity. Such observations can guide where additional research is needed. Most of these steps are based on the use of space imagery and drones.

Stage #8 – analysis of the efficiency of the fertilizer system

The integral indicator of the efficiency of the fertilizer system is yield and “economy”. However, there are other options for assessing the effect of fertilizer application. Americans use corn stalk nitrate test for corn nitrate during the three-week period after the black point (physiological maturity phase).

Sampling takes place as follows: on 15 representative plants, 20 cm of the stem are cut, starting at a height of 15 cm from the soil surface. The leaves are separated, the stems are packed in a paper bag and transferred to the laboratory.

If the content of nitrogen is low in the stems, the fertilizer had to be introduced more, and if excess – the fertilizer should be saved. These findings help to adjust the nitrogen supply system for years to come.

Use modern tools and increase the efficiency of growing corn. There are no limits to improvement. Economically viable crops!