To save more than 20% of resources and get significantly higher yields even under very bad weather conditions. Someone will say that without the purchase of modern high tech it is impossible. But  “Uman Agro”, which in Cherkasy region, succeeded due to the correct calculation by AgriLab.

In view of the increase in the cost of seeds, fertilizers and other resources, as well as – land rent, the “Uman Agro” set out to optimize production. The first step towards this was the agro-diagnostics of 4,000 hectares of fields – half of all land that the company has. 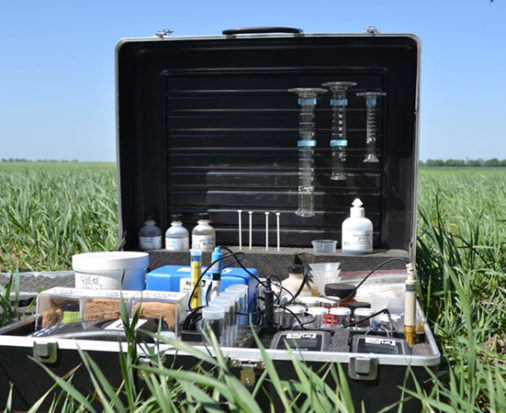 “We wanted to do an agrochemicals analysis in order to know what our soils are, what elements are lacking, to use more efficiently the fertilizers that are needed to grow our crops,” says Yuriy Kravchenko, chief agronomist of Uman Agro. Having obtained the laboratory results of the analysis, we drew attention that sulfur is not enough in soils. And this element is very important for winter wheat. Also, we found out about adequate supply of phosphorus and potassium of our soils, which means that these fertilizers can be saved.
Also, the company conducted a diagnosis of winter wheat nitrogen nutrition.

1.Economy of fertilizers
After agrodiagnostics in the “Uman Agro”, more attention was paid to the rate of fertilizers. Acidifying substances began to buy in smaller quantities and use them only where it really is necessary.
“We adjusted the rates for mineral fertilizers in different fields according to the content of nutrients in the soil. It has proven that in this case we can save money and yields, “Yuriy Kravchenko said.

2. Taking into account weather factors
Agro-diagnostics conducted on the fields of “Uman Agro”, in addition to the traditional set of actions – soil sampling by automated sampler, agrochemical analysis of samples and development of cartograms, also includes determination of weather and climatic factors of the area, critical factors and natural potential of the field. Considering all of these components is especially important now whent global climate change is becoming increasingly noticeable day by day.

3. Increasing yields
“In 2017 weather factors, of course, were noticed. Our region fell under the influence of a heat. But at the same time, we got much better yields than many other colleagues – if they received 38-50 centners per hectare of corn, we have almost 70. All agrotechnological measures were carried out in accordance with the results of agro-diagnostics of the field. Everything was done in order to get the best crop for optimal expenses. And we succeeded “, – commented Yuri Kravchenko.

4. Increase the profitability of production
Of course, agrochemical analysis of the soil requires some costs. However, as experience shows, this costs are justified.
“We counted the economic efficiency of agro-diagnostics by comparing costs and profits with past years, when fertilization was introduced at the average rate, regardless of the field data. Nowadays, we combine the crops needs with the nutritional content of the soil and add only what is not enough. This allows to get the maximum yield at optimum costs, “says the chief agronomist of the Uman Agro.

The calculations showed that after agrodiagnostics, we began to save more than 20% fertilizers. The price for agro-diagnostics was higher than the traditional analysis of the soil. But we are completely satisfied with result and we plan to continue the agro-diagnostics of the all fields. ”

However, on this “Uman Agro” do not stop and try different ways to increase the profitability of crop production. So, last year the diagnostics of nitrogen feeding during vegetation of winter crops was used. To do this, were identified zones by the NDVI index. This allowed precisely to identify homogeneous areas in terms of the condition and development of plants, to develop routes and to select soil samples for analysis. Based on the received data, recommendations were given for fetilizanion.
“We didn’t provide the second feed on a third of the fields, because the results of the analysis showed that there was enough nitrogen. We ventured to go for recommendations and as a result got even more crops than on that fields, where the second nitrogen fertilization was done. ”

The experience of “Uman Agro” confirms: to make the enterprise modern, and production – cost-effective, it is enough to simply change the approach to agriculture. And the result – do not delay. 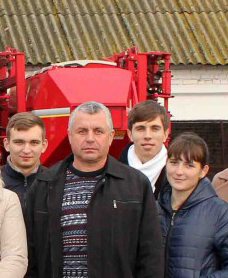 “We counted the economic efficiency of agro-diagnostics by comparing costs and profits with past years, when fertilization was introduced at the average rate, regardless of the field data. Nowadays, we combine the crops needs with the nutritional content of the soil and add only what is not enough. This allows to get the maximum yield at optimum costs”