Oleksandr Zatyshny is one of those farmers who easily perceives all innovations, are interested in new technologies. The first step was the installation of GPS systems that allow you to control the movement of machinery and the quality of technical operations.

“… As a field radio operator I began with the processing of tractors, seedlings and other equipment with modern GPS technology. After all, those facilities that were on agricultural machinery – outdated. Ten years ago, there was no concept of the RTC station, so we had to completely recycle and install a new equipment that accepts all the signals – RTK, GLONASS … This allows you to position the equipment more precisely in the field. If the allowable deviation from the course was 12-15 cm, then the possible RTK signal error is now up to 2-3 cm, and in practice we saw a deviation of only a few millimeters “, – says Alexander Zatyshny.

In LLC Agrofirma – “Nadiya” completely refused plowing.
“For two years in a row, we perform exclusively soil loosening and peeling – shared the experience of Alexander Zatyshny, which allows you to control the density of soil, accumulation in the upper layers of the soil of the cultivars and, as a result, accumulation and preservation of moisture.
Our economy is in the most arid region of the region. It happens that in Tetiev it’s raining, in Zhashko it’s raining, but in us it’s dry. I started with the fact that I acquired a deepening and for two years made a deepening in 90% of the fields – recalls Alexander Zatyshny. This gave a good result. Moisture is well kept – in November, before we fell out of snow, we already had 50 cm of soiled soil. In addition, streams in fields and puddles disappeared, which means that humus is not washed away. ”

“We can all throw mines, but this is not an option”

The agrarian case is rather expensive. Prices for fuel, fertilizers, seeds, machinery – are increasing every year. Therefore, to the issue of saving, manufacturers treat each year more carefully, and to the issue of investment – more cautious.
Oleksandr Zatyshny is interested in new technologies and innovations: “I am curious about where you can save,” he says. Therefore, I decided to carry out agrodiagnostics of the field in AgriLab. After all, a few agronomists can understand the task of combining the economic component with agronomy. He can provide 100 c / hectare of wheat, but he has to understand – it can be enough 80 c / ha, but at the same time less than once the cost per part per square meter. We all can throw mines, but this is not an option. ”
“So, we conducted an analysis of the soil in AgriLab,” continues Oleksandr Zatyshny. The results were quite expected: the soil is in good condition. And in relation to pH – the average level, not sour, and humus are provided at a good level … Of course, spend money to find out that you have more or less and so is all good – a little pity. But we got recommendations for a fertilizer system for our crops. They used them. And about 12% of the resources – saved! “.

“Ukrainian chemical industry is not ready for precision agriculture yet”

Alexander Zatyshny is not going to stop on the analysis of the soil. The prospect of development, he sees in the broader implementation of precision agriculture. But so far there are factors that hold him, like many other farmers, from this step.
“I want to really go to the next stage – the differentiated and mainstream row-belt fertilizer application. It is clear that this is more about the common crops. I believe that the chemical industry is not yet fully prepared for such inquiries. And this is not only my opinion, but also many other colleagues-agrarians. It is necessary for us, agrarians, to choose mono fertilizers for the possibility to implement all the recommendations of the agro-laboratories for all 100 percent and not to apply mixed quality guarantees which are in doubt.
In this case, I will do a deeper re-equipment of the equipment, which will allow me to make at least three different fertilizers in one pass with different standards and at different depths. Without them, I can not fully comply with the recommendations I have given me. After all, using NPK to introduce the required norm of phosphorus or potassium, we add excess nitrogen or vice versa. “In the case of mono fertilizers, it is possible to save enough resources, finances and, as a result, to have more profits.”
“We do not need yesterday’s agronomists, we need today’s agronomists
What determines the success of the introduction of innovations in production? From technology? Financial security? Yes, but first and foremost – from the readiness of employees to accept the innovations. And this is exactly the problem. Oleksandr Zatyshniy had previously been dealing with the technical sphere and was accustomed to constant changes in it, and therefore quickly noticed the conservatism of the agrarians.
“We do not need yesterday’s agronomists, we need today’s agronomists. A modern agronomist is an IT skilled agronomist, able to combine agronomic data with economic analysis. Then you can make the right conclusions. Meanwhile, the frames of most agricultural companies are not ready for precise agriculture. They need to be induced to a new one, to persuade, because they are accustomed to doing “in the old way” … Exact farming is not tomorrow’s day, but today’s. It is necessary to know what to do, so that the soil does not degrade, how to save and increase efficiency “.

The climate changes – we change the approach to agriculture

This year the weather was extremely unfavorable – it’s too dry and hot as for a temperate climate. However, the deepening of the corn and sunflower fields did not yield the worst result.
“According to sunflower this year (2017) we received 3 t / ha. This is as much as in 2016, when the weather was more favorable, but without deepening. This year wheat collected 40 c / ha. In our region – not the worst result, because neighboring farms had a yield of 27 c / ha. But if the weather conditions were different this year, I would have a much higher wheat crop. Why do I say so? Because on that field, which was in the lowlands and little more moisture, I collected my planned 100 c / ha. ”
Oleksandr Zatyshnyy believes that introducing innovations into agriculture can be adapted both to climate change and to changes in economic “weather”. 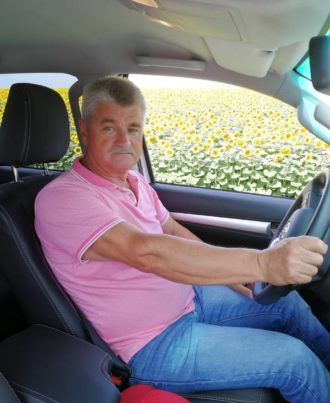 “So, we conducted an analysis of the soil in AgriLab. The results were quite expected: the soil is in good condition. And in relation to pH – the average level, not sour, and humus are provided at a good level … Of course, spend money to find out that you have more or less and so is all good – a little pity. But we got recommendations for a fertilizer system for our crops. They used them. And about 12% of the resources – saved! “.