Burned out tanks in the fields, remnants of weapons, debris from airstrikes… Such is the present of Ukrainian farmers.

In the entire history of the world, the place where soil pollution due to military actions was the greatest was France. After the First World War, a large area here known as the “Zone Rouge” was declared unsuitable for use due to soil contamination with heavy metals and chemicals. Will Ukraine have its own “Zone Rouge”?

“Thousands of hectares of Ukrainian lands were bombed. The pictures show hundreds of rips in the fields. But there is another aspect that we do not see – the chemical one, – says Oleksiy Tarasenko, chief agrochemist of the AgriLab company. Every projectile explosion on the field creates a blast wave and chemical contamination. The consequences of the blast wave are the formation of craters, soil compaction, the destruction of vegetation and the death of soil fauna. All this causes a change in the hydrolytic regime and destruction of the soil structure and, ultimately, provokes soil erosion and desertification. Military weapons and explosives use chemical compounds that are not biodegradable and can contaminate soil and surface water.”

Bombing, shelling, mines, the movement of tanks on the fields… All this has different effects on the soil. AgriLab, a company engaged in soil analysis and precision agriculture, began to study the global experience of restoring soil cover after military conflicts in order to develop an action algorithm for Ukraine.

“Many fields have trenches and ditches to stop offensive operations. Such measures fundamentally change the structure of the soil profile. As a result of shelling and bombing, craters are formed and soil horizons are mixed. As a result, the landscape and topography change. Anti-tank and anti-personnel mines are similarly damaging. In addition, debris and explosives remain on the fields. Military equipment on the field compacts the soil. Fires often occur in the fields near the places of hostilities, which cause the burning of the fertile layer and the destruction of useful microflora,” noted Oleksiy Tarasenko.

Fields under the wheels of tanks

“Research on measuring the impact of military equipment on the soil was also carried out,” says Oleksiy Tarasenko. For example, in the USA, they compared the impact of technology on soils with different grain size. For this purpose, the M1A1 tracked tank weighing 57.2 tons was used. Both medium and heavy loamy soils were negatively affected even after 1 pass of the specified technique. The tank compacted the soil, and this indirectly led to the formation of less biomass of plant cover. Let me remind you that the optimal density for the majority of rural areas cultures is in the range from 1 to 1.3 g/cm3.” 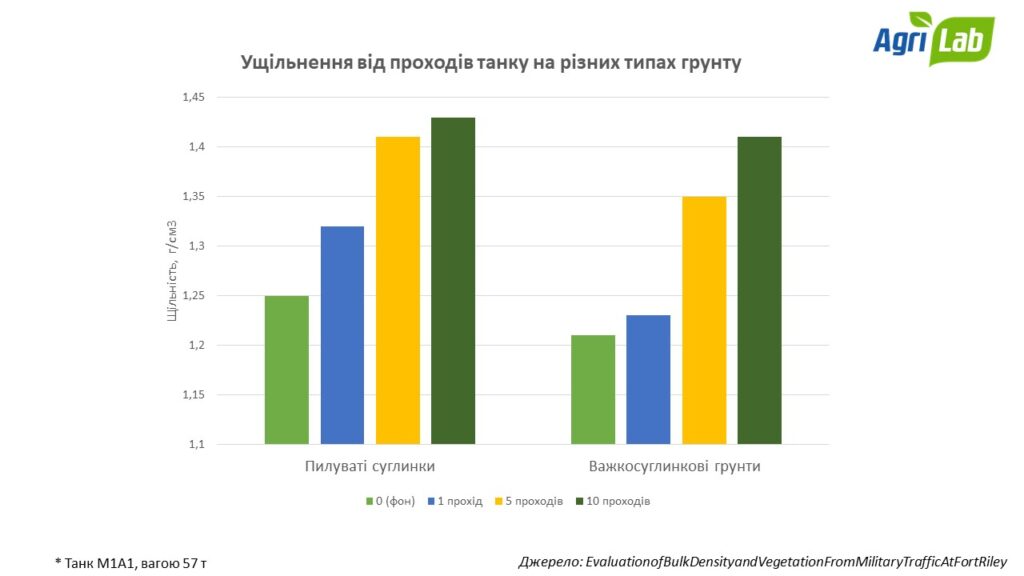 A plan for the restoration of fields where heavy military equipment was used:

Field fires often occur due to shelling. There are also cases where military equipment was burning on the field. As a result, the fertile soil layer burns out, dehydration and “sterilization” occurs – both pathogenic microorganisms and useful biota die. Power cells are also lost. For example, nitrogen loss from stubble burning per 1 ha of grain is from 20 kg, and carbon loss is up to 3000 kg/ha.

The plan for the restoration of fields burnt due to shelling:

Every war leaves a “chemical trail” on the soil. However, it is not only about active hostilities, bombing, mining, etc. Military training grounds and locations where military training takes place also affect the soil cover of the surrounding areas. Among the studied locations of military actions/exercises, most fell into the category of heavily to extremely polluted. Unfortunately, Ukraine can lead this list, because the areas covered by military actions are huge. And the Russians do not shy away from using prohibited types of weapons. 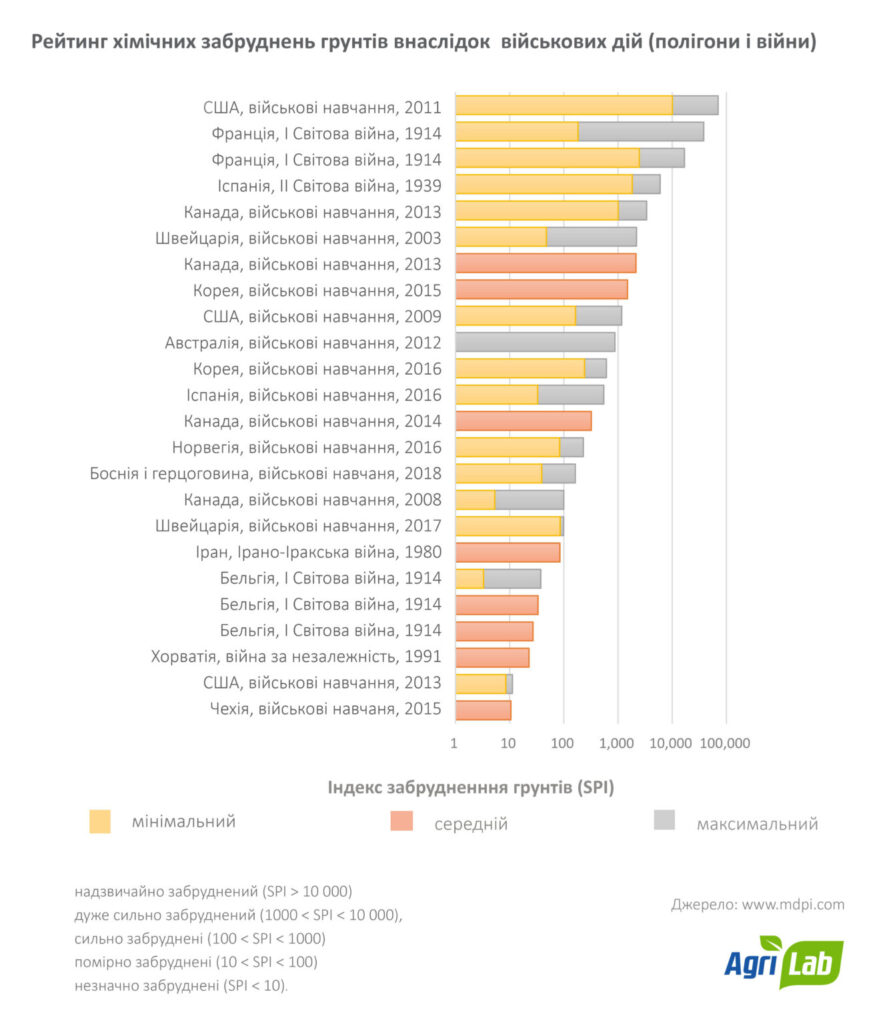 Chemical contamination as a result of military operations should be considered from 3 positions: contamination with potentially toxic elements, explosives, and other substances.

“Pollution with heavy metals can be felt for more than a dozen years. For example, bullets can release lead, which will then be absorbed by plants, says the AgriLab specialist. Lead distributed in different soil fractions may initially be inert but then become reactive due to changing soil conditions (e.g., pH, moisture). In addition to lead, metals such as chromium (Cr), arsenic (As), mercury (Hg), nickel (Ni), zinc (Zn) and cadmium (Cd) enter the soil with weapon residues. Studies of plants on military training grounds have shown that they can accumulate heavy metals. At the same time, pollution was not limited to the territory of the landfill.

There are weapons that do not contain lead, made of iron, steel and various metals. But it can become a source of pollution with other heavy metals – bismuth, chromium, nickel.

The specific characteristics of acidic soils, sandy granulometric composition, with a low cation exchange capacity or a low level of organic matter (individually or in combination) will enhance the processes of heavy metal mobilization. Whereas alkaline soils, loam/silty loam/clay texture, high capacity and high organic content limit the mobility of potentially toxic elements.’

Almost all studies indicate highly polluted profiles of the upper soil layer (0–10 cm). With increasing depth, the level of contamination decreases, except for those potentially toxic elements that have relatively higher levels of accumulation with increasing depth. Contamination, as a rule, is limited to the first half meter of depth.

Soil analysis at a landfill site in Switzerland showed heavy lead, stybium, copper, and nickel contamination. Their concentration decreased with depth and already at a depth of 40 cm reached background values ​​for stibium and copper, and for lead – at a depth of 60-70 cm. The decrease in concentration was associated with the characteristics of the soil of the area, which has a background saturated with silicates and an acidic base. Another study conducted in Canada showed that contamination was mostly limited to a depth of 30–40 cm from the soil surface.

Does pollution decrease over time? And how long does it take to treat the fields?

Several years ago, the International Organization “Ecology-Law-Human” conducted a study on the impact of military operations on the environment in the east of Ukraine, namely in the Amvrosiiv and Shakhtar districts of the Donetsk region.

With the help of satellite images, the size and number of sinkholes were identified, the type of projectile, the rupture of which led to the formation of the sinkhole, as well as the scale of the destruction of the soil cover was estimated and the damage caused to the state was calculated.

“Researchers were able to calculate that on the territory of 225 km2, projectile ruptures led to the formation of 15,505 sinkholes. In places with a high density of sinkholes, layers of soil, underlying rock, and many debris were mixed. In addition, tons of toxic substances formed during the detonation were released into the environment. According to their calculations, no less than 392 tons of metal fragments are scattered on this territory. Because of this, the fields are unsuitable for agricultural use,” says Oleksiy Tarasenko.

In addition, the oxidation products of at least 58 tons of explosives, as well as 70 tons of aluminum oxide, formed as a result of the oxidation of powdered aluminum, which is used together with TNT as an explosive, entered the environment.

Metal debris is also dangerous for the environment. Cast iron with sulfur and copper impurities is usually used for the production of ammunition casings. Copper is a heavy metal and some of its compounds can be toxic and affect the functioning of living organisms. 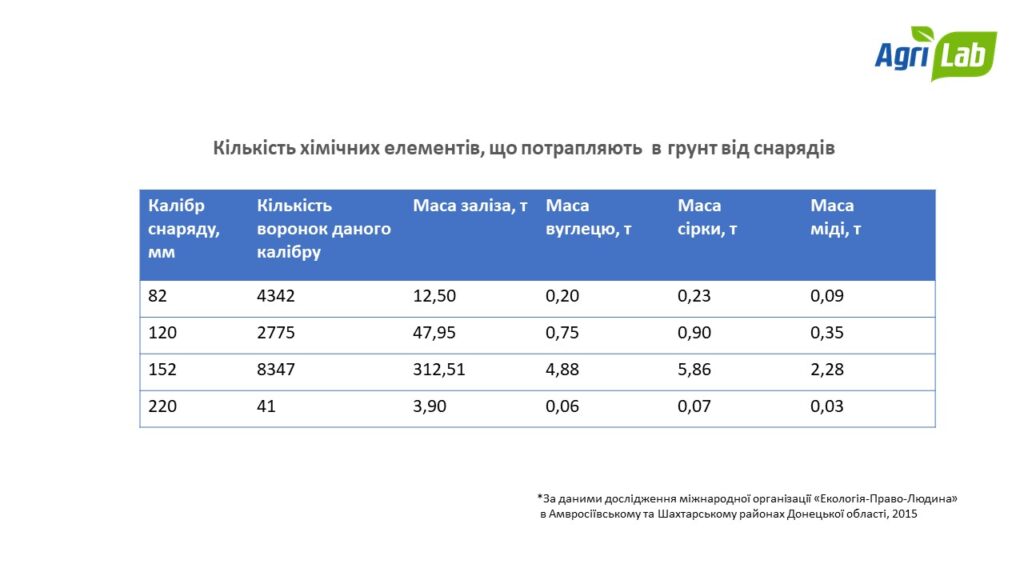 If one 122 mm projectile produces 1,600 to 2,350 fragments, then 2,775 such shells will cause the formation of 4.44 million to 6.5 million fragments. And these are only the shells of the “Grad” installation. That is, the chemical substances that got into the soil are very dispersed, and this contributes to their rapid spread, in particular, getting into the ground and surface waters. 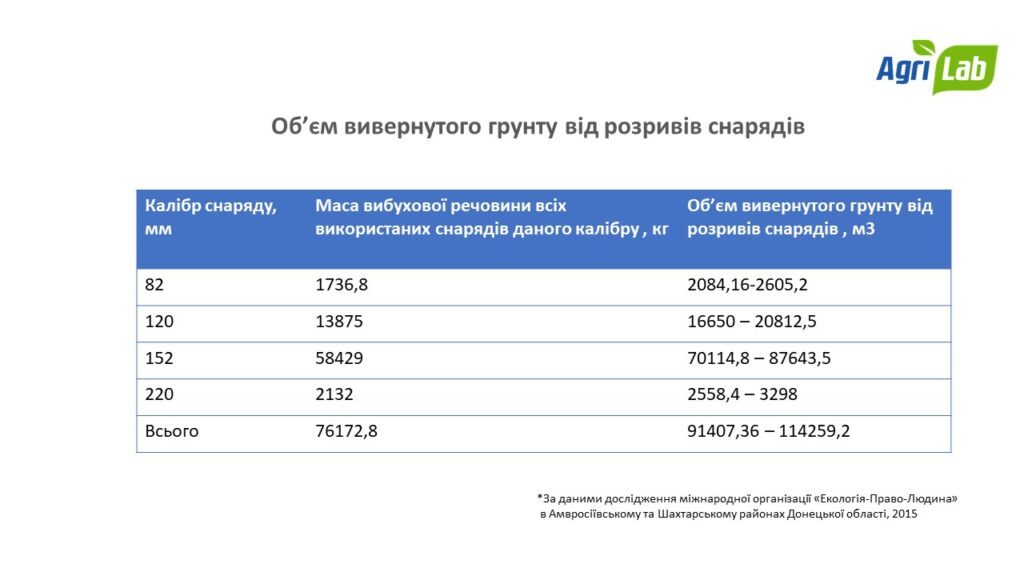 What to do with this area? It will be very difficult to carry out reclamation here. And it’s not just about the fact that a huge amount of soil needs to be buried back to level the landscape. But also about cleaning from chemicals and fragments of the metal casing of shells. At the same time, it should be remembered that 3% of explosive shells do not detonate and they remain unexploded.

Therefore, the reclamation of such territories is long, expensive and dangerous, and it takes hundreds of years for the natural recovery of land resources from pollution.

“Regarding the chemical analysis of the soil carried out on the territory of the “Chalk flora” reserve as part of the same study, the concentration of titanium in the soil sample at the place of the projectile rupture was 150 times higher than the background indicators. The concentration of vanadium was 100 mg/kg, and there was no vanadium in the pure sample. Titanium-based alloys with vanadium additives are used in aviation and rocket technology. The researchers also found a 2.3-fold excess of sulfates, mobile forms of heavy metals: lead — 1.3 times, cadmium — 1.5 times. Also, in the village of Zakvitne, an excess of strontium was found at the site of shell explosions. Its concentration was 150 mg/kg. The content of sulfates in the same sample exceeded the norm by more than 4 times, cadmium — by 9 times. “At the site of shell explosions in the Donetsk region, an excess of mobile forms of heavy metals was recorded, in particular, manganese, copper, iron, lead, cadmium, chromium and zinc,” said Oleksiy Tarasenko.

Also, Oleksiy Tarasenko spoke about the data of the study of the impact of hostilities on the soil, which was conducted by order of the OSCE Project Coordinator in Ukraine by the Water Monitoring Laboratory of the Siversk-Donetsk Basin Water Resources Department.

Scientists took soil samples in the areas where the projectiles hit and 500 meters away from them. The selection of soil samples was carried out from the test site using the “envelope” method with averaging over 5 points.

The average value of indicators of chemical pollution was, in general, at the level of background values. A systematic excess of 1.1-1.3 times was recorded for mercury, vanadium, cadmium, non-radioactive strontium and gamma radiation. The maximum excess for individual indicators was 1.2-2 times the background level, and only in some cases the excess reached 7-17 times for the samples taken in Sloviansk and Shchasta.

Plan for restoration of fields damaged by explosions and burning of military equipment:

“After the de-occupation of our territories and demining of the fields, we will be able to conduct our own research and give more specific answers. In the meantime, we continue to study world experience and develop algorithms with foreign colleagues. We have a lot of work ahead of us,” says the chief agrochemist of Agrilab.